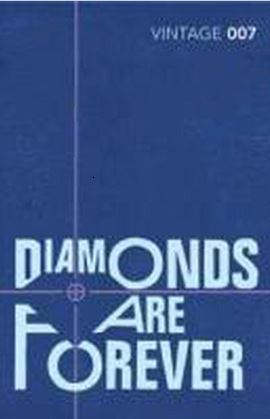 What follows is a list of excerpts featuring James Bond’s personal tastes and preferences as written down in Diamonds are Forever (1956), Ian Fleming’s fourth James Bond-novel.

He watched as Bond automatically reached for the flat gun-metal cigarette case in his hip pocket and walked over to the open window and looked down on to Regent’s Park.

It was six o’clock on Thursday evening and Bond was packing his suitcase in his bedroom at the Ritz. It was a battered but once expensive pigskin Revelation and its contents were appropriate to his cover. Evening clothes; his lightweight black and white dog-tooth suit for the country and for golf; Saxone golf shoes; a companion to the dark blue, tropical worsted suit he was wearing, and some white silk and dark blue Sea Island cotton shirts with collars attached and short sleeves. Socks and ties, some nylon underclothes, and two pairs of the long silk pyjama coats he wore in place of two-piece pyjamas.

None of these things bore, or had ever borne, any name-tags or initials.

Bond completed his task and proceeded to fit his remaining possessions, his shaving and washing gear, Tommy Armour on How to Play your Best Golf all the Time, and his tickets and passport into a small attaché case, also of battered pigskin. This had been prepared for him by Q Branch and there was a narrow compartment under the leather at the back which contained a silencer for his gun and thirty rounds of .25 ammunition.

On an impulse, he put his right hand under his coat and drew the .25 Beretta automatic with the skeleton grip out of the chamois leather holster that hung just below his left armpit. It was the new gun M had given him ‘as a memento’ after his last assignment, with a note in M’s green ink that had said, You may need this.

Bond walked over to the bed, snapped out the magazine, and pumped the single round in the chamber out on to the bedspread. He worked the action several times and sensed the tension on the trigger spring as he squeezed and fired the empty gun. He pulled back the breech and verified that there was no dust round the pin which he had spent so many hours filing to a point, and he ran his hand down the blue barrel from the tip of which he had personally sawn the blunt foresight. Then he snapped the spare round back into the magazine, and the magazine into the taped butt of the thin gun, pumped the action for a last time, put up the safe and slipped the gun back under his coat.

Steak and champagne for dinner, and the wonderful goblet of hot coffee laced with Irish whisky and topped with half an inch of thick cream. A glance at the junk in the airport shops, the ‘Irish Horn Rosaries,’ the ‘Bog Oak Irish Harp,’ and the ‘Brass Leprechauns,’ all at $1.50, and the ghastly ‘Irish Musical Cottage’ at $4, the furry, unwearable tweeds and the dainty Irish linen doilies and cocktail napkins.

The best Vermouth Bond ever tasted

There was a medium dry Martini with a piece of lemon peel waiting for him. Bond smiled at Leiter’s memory and tasted it. It was excellent, but he didn’t recognize the Vermouth.

“Made with Cresta Blanca,” explained Leiter. “New domestic brand from California. Like it?”

“Best Vermouth I ever tasted.”

“And I’ve taken a chance and ordered you smoked salmon and Brizzola,” said Leiter. “They’ve got some of the finest meat in America here, and Brizzola’s the best cut of that. Beef, straight-cut across the bone. Roast and then broiled. Suit you?”

“Anything you say,” said Bond. “We’ve eaten enough meals together to know each other’s tastes.”

“I’ve told them not to hurry,” said Leiter. He rapped on the table with his hook. “We’ll have another Martini first and while you drink it you’d better come clean.”

Smoked salmon and a Ronson lighter

The smoked salmon was from Nova Scotia and a poor substitute for the product of Scotland, but the Brizzola was all that Leiter had said, so tender that Bond could cut it with a fork. He finished his lunch with half an avocado with French dressing and then dawdled over his Espresso.

Leiter tapped a Lucky Strike out on to the table with his left hand and lit it at the flame of Bond’s Ronson.

“(…) But I’ll have another and probably another one after that. I just don’t want to drink your Vodka Martinis under false pretences.”
Bond laughed. He gave the order and turned back to her. “We haven’t ordered dinner yet,” he said. “I was going to suggest shellfish and hock. That might have changed your mind. The combination’s supposed to have quite an effect.”

“Listen, Bond,” said Tiffany Case, “it’d take more than Crabmeat Ravigotte to get me into bed with a man. In any event, since it’s your check, I’m going to have caviar, and what you English call ‘cutlets,’ and some pink champagne. I don’t often date a good-looking Englishman and the dinner’s going to live up to the occasion.” (…) “Just. You know what they say about this joint? ‘All you can eat for only three hundred bucks.’”

The waiter brought the Martinis, shaken and not stirred, as Bond had stipulated, and some slivers of lemon peel in a wine glass. Bond twisted two of them and let them sink to the bottom of his drink.

Bond beckoned to the maître d’hôtel. He gave the order, and the wine waiter, who came from Brooklyn but wore a striped jacket and a green apron and had a silver chain with a tasting-cup round his neck, went off for the Clicquot Rosé.

And then the waiter came with the caviar, and suddenly the noise of the restaurant burst into the warm, silent room-within-a-room which they had built for themselves, and the spell was broken.

There was no need to answer the question immediately. Bond suddenly felt they had all the time in the world.

The wine waiter brought the champagne and Bond tasted it. It was ice cold and seemed to have a faint taste of strawberries. It was delicious.
(…)

They were interrupted by the arrival of the cutlets, accompanied by asparagus with mousseline sauce, and by one of the famous Kriendler brothers who have owned ‘21’ ever since it was the best speak-easy in New York.

Tiffany ordered a Stinger made with white crème de menthe and Bond ordered the same.

Bond sent the cable ‘Collect’ via Western Union, had his fourth shower of the day and went to Voisin’s where he had two Vodka Martinis, Oeufs Benedict and strawberries.

But the scrambled eggs and sausages and hot buttered rye toast and the Millers Highlife beer came quickly and were good, and so was the iced coffee that followed it, and with their second glass they got away from ‘shop’ and their private lives and got on to Saratoga.

Bond took a shower and changed and walked down the road and had two Bourbon old-fashioneds and the Chicken Dinner at $2.80 in the air-conditioned eating house on the corner that was as typical of ‘the American way of life’ as the motel.

He walked home with the crowds, had a shower and some sleep and then found his way to a restaurant near the sales ring and spent an hour drinking the drink that Leiter had told him was fashionable in racing circles—Bourbon and branch-water. Bond guessed that in fact the water was from the tap behind the bar, but Leiter had said that real Bourbon drinkers insist on having their whisky in the traditional style, with water from high up in the branch of the local river where it will be purest. The barman didn’t seem surprised when he asked for it, and Bond was amused at the conceit. Then he ate an adequate steak and, after a final Bourbon, walked over to the sales ring, which Leiter had fixed as a rendezvous.

Twenty minutes after he had sat down, Bond was able to order a dozen cherrystone clams and a steak, and, since he expected a further long pause, a second Vodka dry Martini.

He walked over to the bar and ordered himself a Bourbon and branch-water to celebrate the five thousand dollars in his pocket.

The barman produced a corked bottle of water and put it beside Bond’s ‘Old Grandad.’

Bond half turned his head. “Bourbon and branch-water,” he said. “Half and half.”

“I expect because I think I can handle life better on my own. Most marriages don’t add two people together. They subtract one from the other.”

What sort of woman Bond thinks would add to him

‘Somebody who can make Sauce Béarnaise as well as love,’ he said.

But only when I retire. Not fair on the children otherwise. My job’s not all that secure.

Bond slipped off the bed and went over and examined the contents of the tray. He smiled to himself. There was a quarter bottle of Bollinger, a chafing dish containing four small slivers of steak on toast canapés, and a small bowl of sauce. Beside this was a pencilled note which said ‘This Sauce Béarnaise has been created by Miss T. Case without my assistance,’ Signed ‘The Chef.’

Bond filled a glass with champagne and spread a lot of the Béarnaise on a piece of the steak and munched it carefully. Then he went to the telephone.

He heard the low delighted laugh at the other end.

“Well, you can certainly make wonderful Sauce Béarnaise….”
He put the receiver back on its cradle.