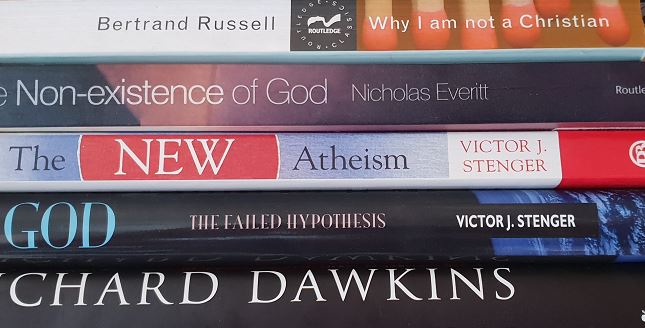 It’s often said one cannot prove a negative. Most often, this wisdom is applied to the (non-)existence of god. You very frequently hear someone state that you can’t prove the non-existence of God. Even atheists will tell you this. Luckily, they are not entirely right.

END_OF_DOCUMENT_TOKEN_TO_BE_REPLACED

The main importance of this book lies in Herman Philipse’s introduction of a few helpful new philosophical concepts, as well as in what could be described as his logico-linguistic analysis of the choice, or rather: the dilemma between atheism and religion. Or, as you like, his meta-plea-for-atheism. ‘Meta’ because Philipse tries to exhaust all the possible defenses of religion by arguing that all those defenses either fall within the bounds of reason, or outside of those bounds. And that each of those positions is impossible to hold.

END_OF_DOCUMENT_TOKEN_TO_BE_REPLACED

Synopsis | Bertrand Russell: Why I am not a Christian Bertrand Russell – Why I am not a Christian: And other essays on religion and related subjects. London: Routledge (1957, 2009)

Why I am not a Christian – the essay

Why I am not a Christian, is an essay written by Bertrand Russell, based on a talk given in 1927. As the subtitle of this publication states, it’s a collection of essays. Only this first essay really analyzes the philosophical points of discussion, and dispels them all.