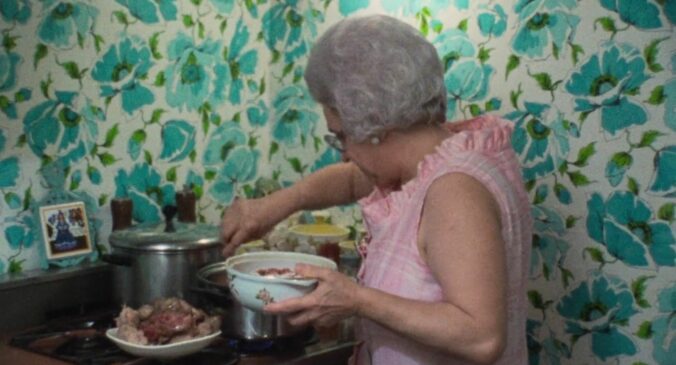 In 1974, Scorsese published a very interesting talk he had with his parents, Americans from Italian descent. They tell hem about the old days, having 13 people living in three-room apartments, no electricity, washing by hand, lavatories in the garden, moving over from another continent, ethnic struggles.

A very, very different time, and even world.

Last but not least, we get Scorsese’s mothers’ recipe for sauce with meatballs and meat. Watch the documentary and try out Kathy’s recipe!

Singe an onion & a pinch of garlic in oil.

Throw in a piece of veal, a piece of beef, some pork sausage & a lamb neck bone.

And a basil leaf.

When the meat is brown, take it out, & put it on a plate.

Put in a can of tomato paste and some water.

Pass a can of packed whole tomatoes through a blender and pour it in.

Let it cook for awhile.

Throw the meat back in.

Put a slice of bread, without crust, 2 eggs ,& a drop of milk, into a bowl of ground veal & beef.

Add salt, pepper, some cheese & a few spoons of sauce.

Mix it with your hands.

Roll them up, throw them in.

Let it cook for another hour.

James Bond’s personal tastes and preferences in Goldfinger (the novel)