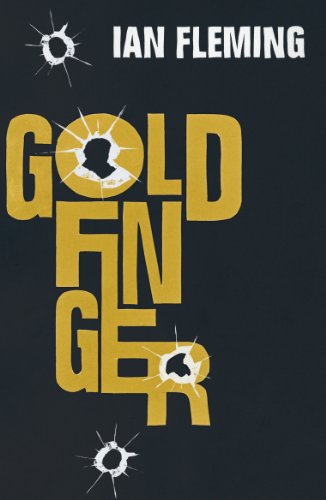 James Bond’s personal tastes and preferences in Goldfinger (the novel)

What follows is a list of excerpts featuring James Bond’s personal tastes and preferences as written down in Goldfinger (1959), Ian Fleming’s sixth James Bond-novel.

He signalled to a waitress and ordered another double bourbon on the rocks. When the wide, chunky glass came, he swirled the liquor round for the ice to blunt it down and swallowed half of it. He stubbed out the butt of his cigarette and sat, his chin resting on his left hand, and gazed moodily across the twinkling tarmac to where the last half of the sun was slipping gloriously into the Gulf.

Bond affected not to notice the offered lighter. He disliked held-out lighters. He picked up his own and lit the cigarette.

With a slice of lemon peel

No wonder the neat card inside Bond’s wardrobe had said that the cost of the Aloha Suite was two hundred dollars a day. Bond made a rough calculation. If he was paying the bill, it would take him just three weeks to spend his whole salary for the year. Bond smiled cheerfully to himself. He went back into the bedroom, picked up the telephone and ordered himself a delicious, wasteful breakfast, a carton of king-size Chesterfields and the newspapers.

By the time he had shaved and had an ice-cold shower and dressed it was eight o’clock.

He slipped on the coat of his dark blue tropical worsted suit, straightened his tie and slung the strap of the Leica round his neck so that the camera hung at his chest.

On the first night the girl had brought him tea. Bond had looked at her severely. ‘I don’t drink tea. I hate it. It’s mud. Moreover it’s one of the main reasons for the downfall of the British Empire. Be a good girl and make me some coffee.’ The girl had giggled and scurried off to spread Bond’s dictum in the canteen. From then on he had got his coffee. The expression ‘a cup of mud’ was seeping through the building.

James Bond flung the D.B.III through the last mile of straight and did a racing change down into third and then into second for the short hill before the inevitable traffic crawl through Rochester.

Bond settled back into second and let the car idle. He reached for the wide gunmetal case of Morland cigarettes on the neighbouring bucket seat, fumbled for one and lit it from the dashboard.

The car was from the pool. Bond had been offered the Aston Martin or a Jaguar 3.4. He had taken the D.B.III. Either of the cars would have suited his cover — a well-to-do, rather adventurous young man with a taste for the good, the fast things of life. But the D.B.III had the advantage of an up-to-date triptyque, an inconspicuous colour — battleship grey — and certain extras which might or might not come in handy. These included switches to alter the type and colour of Bond’s front and rear lights if he was following or being followed at night, reinforced steel bumpers, fore and aft, in case he needed to ram, a long-barrelled Colt .45 in a trick compartment under the driver’s seat, a radio pick-up tuned to receive an apparatus called the Homer, and plenty of concealed space that would fox most Customs men.

Bond inspected his room, a double with bathroom, on the top floor of the Channel Packet, unpacked his few belongings and went down to the snack bar where he had one vodka and tonic and two rounds of excellent ham sandwiches with plenty of mustard.

Getting ready to go

Bond changed his socks and put on the battered old pair of nailed Saxones. He took off the coat of his yellowing black and white hound’s-tooth suit and pulled on a faded black wind-cheater. Cigarettes? Lighter? He was ready to go.

But, in Bond’s case, Goldfinger could not have known that high tension was Bond’s natural way of life and that pressure and danger relaxed him.

Bond at the bar

At six o’clock Bond went down to the bar and had a large vodka and tonic with a slice of lemon peel. The bar was empty save for a group of American Air Force officers from Manston. They were drinking whisky and water and talking baseball. Bond wondered if they had spent the day toting a hydrogen bomb round the skies over Kent, over the four little dots in the dunes that had been his match with Goldfinger. He thought wryly, Not too much of that whisky, cousins, paid for his drink, and left.

When in doubt, always choose a station hotel

Bond consulted his Michelin. Goldfinger would stop at five-star hotels and eat fillets of sole and roast chicken. It would be the Arcades for him — perhaps the Moderne. Bond would have liked to stay outside the town and sleep on the banks of the Loire in the excellent Auberge de la Montespan, his belly full of quenelles de brochet. He would have to stick closer to his fox. He decided on the Hôtel de la Gare and dinner at the station buffet.

When in doubt, Bond always chose the station hotels. They were adequate, there was plenty of room to park the car and it was better than even chances that the Buffet de la Gare would be excellent. And at the station one could hear the heart-beat of the town. The night-sounds of the trains were full of its tragedy and romance.

The Hôtel de la Gare was all he had expected — cheap, old-fashioned, solidly comfortable. Bond had a hot bath, went back to his car to make sure the Rolls hadn’t moved, and walked into the station restaurant and ate one of his favourite meals — two oeufs cocotte à la crème, a large sole meunière (Orleans was close enough to the sea. The fish of the Loire are inclined to be muddy) and an adequate Camembert. He drank a well-iced pint of Rose d’Anjou and had a Hennessy’s Three Star with his coffee. At ten-thirty he left the restaurant, checked on the Rolls and walked the virtuous streets for an hour. One more check on the Rolls and bed.

At six o’clock the next morning the Rolls hadn’t moved. Bond paid his bill, had a café complet — with a double ration of coffee — at the station, motored down to the quais and backed his car up a side street.

Bonds favourite corner of the world

Bond motored comfortably along the Loire in the early summer sunshine. This was one of his favourite corners of the world.

Please buy us lunch — anything you like for yourself. For me, six inches of Lyon sausage, a loaf of bread, butter, and half a litre of Mâcon with the cork pulled.’

Bond at a brasserie

Bond motored across the beautiful Pont du Mont Blanc and along the brightly lit quai to the Bavaria, a modest Alsatian brasserie that had been the rendezvous of the great in the days of the League of Nations. He sat by the window and drank Enzian washed down with pale Löwenbrau. p. 222

It was eight o’clock. The Enzian, the firewater distilled from gentian that is responsible for Switzerland’s chronic alcoholism, was beginning to warm Bond’s stomach and melt his tensions. He ordered another double and with it a choucroute and a carafe of Fondant.

Bond ordered a slice of gruyère, pumpernickel and coffee.

A lot of food!

Bond said sharply, ‘Oddjob, I want a lot of food, quickly. And a bottle of bourbon, soda and ice. Also a carton of Chesterfields, king-size, and either my own watch or another one as good as mine. Quick march! Chop-chop! And tell Goldfinger I want to see him, but not until I’ve had something to eat. Come on! Jump to it! Don’t stand there looking inscrutable. I’m hungry.’

The encounter put Bond in good humour. For some reason Goldfinger had decided against killing them. He wanted them alive. Soon Bond would know why he wanted them alive but, so long as he did, Bond intended to stay alive on his own terms. Those terms included putting Oddjob and any other Korean firmly in his place, which, in Bond’s estimation, was rather lower than apes in the mammalian hierarchy.

Bond said equably, ‘We will have a talk, Goldfinger. And I will tell you certain things. But not until you have taken off these straps and brought me a bottle of bourbon, ice, soda water and a packet of Chesterfields.