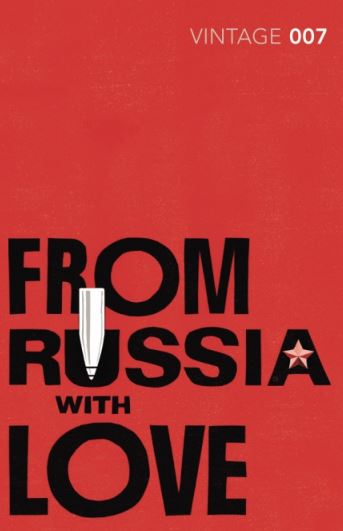 What follows is a list of excerpts featuring James Bond’s personal tastes and preferences as written down in From Russia with Love (1957), Ian Fleming’s fifth James Bond-novel.

Their agents are good. They pay them very little money – only a thousand or two thousand roubles a month – but they serve with devotion.

The SMERSH conversation and file on James Bond

Nikitin broke in. ‘English spies we have captured speak highly of this man. He is certainly much admired in his Service. He is said to be a lone wolf, but a good-looking one.’

The first [photograph] was dated 1946. It showed a dark young man sitting at a table outside a sunlit café. There was a tall glass beside him on the table and a soda-water siphon. The right forearm rested on the table and there was a cigarette between the fingers of the right hand that hung negligently down from the edge of the table. The legs were crossed in that attitude that only an Englishman adopts—with the right ankle resting on the left knee and the left hand grasping the ankle. It was a careless pose. The man didn’t know that he was being photographed from a point about twenty feet away.

The third [photograph] was from 1951. Taken from the left flank, quite close, it showed the same man in a dark suit, without a hat, walking down a wide empty street. He was passing a shuttered shop whose sign said ‘Charcuterie.’ He looked as if he was going somewhere urgently. The clean-cut profile was pointing straight ahead and the crook of the right elbow suggested that his right hand was in the pocket of his coat. General G. reflected that it was probably taken from a car. He thought that the decisive look of the man, and the purposeful slant of his striding figure, looked dangerous, as if he was making quickly for something bad that was happening further down the street.

It was a dark, clean-cut face, with a three-inch scar showing whitely down the sun-burned skin of the right cheek. The eyes were wide and level under straight, rather long black brows. The hair was black, parted on the left, and carelessly brushed so that a thick black comma fell down over the right eyebrow. The longish straight nose ran down to a short upper lip below which was a wide and finely drawn but cruel mouth. The line of the jaw was straight and firm. A section of dark suit, white shirt and black knitted tie completed the picture.

General G. held the photograph out at arm’s length. Decision, authority, ruthlessness—these qualities he could see. (…)

‘This man is invariably armed with a .25 Beretta automatic carried in a holster under his left arm. Magazine holds eight rounds. Has been known to carry a knife strapped to his left forearm; has used steel-capped shoes; knows the basic holds of judo. In general, fights with tenacity and has a high tolerance of pain (see Appendix “B”).’

(…) ‘Conclusion. This man is a dangerous professional terrorist and spy. He has worked for the British Secret Service since 1938 and now (see Highsmith file of December 1950) holds the secret number “007” in that Service. The double 0 numerals signify an agent who has killed and who is privileged to kill on active service. There are believed to be only two other British agents with this authority. The fact that this spy was decorated with the CMG in 1953, an award usually given only on retirement from the Secret Service, is a measure of his worth.(…).’

General G. shut the file and slapped his hand decisively on the cover.

He was a man of war and when, for a long period, there was no war, his spirit went into a decline.

(…) peace had reigned for nearly a year. And peace was killing him.

At 7.30 on the morning of Thursday, August 12th, Bond awoke in his comfortable flat in the plane-tree’d square off the King’s Road and was disgusted to find that he was thoroughly bored with the prospect of the day ahead. Just as, in at least one religion, accidie is the first of the cardinal sins, so boredom, and particularly the incredible circumstance of waking up bored, was the only vice Bond utterly condemned.

Bond reached out and gave two rings on the bell to show May, his treasured Scottish housekeeper, that he was ready for breakfast. Then he abruptly flung the single sheet off his naked body and swung his feet to the floor.

(…) Bond went down on his hands and did twenty slow press-ups, lingering over each one so that his muscles had no rest. When his arms could stand the pain no longer, he rolled over on his back and, with his hands at his sides, did the straight leg-lift until his stomach muscles screamed. He got to his feet and, after touching his toes twenty times, went over to arm and chest exercises combined with deep breathing until he was dizzy. Panting with the exertion, he went into the big white-tiled bathroom and stood in the glass shower cabinet under very hot and then cold hissing water for five minutes.

At last, after shaving and putting on a sleeveless dark blue Sea Island cotton shirt and navy blue tropical worsted trousers, he slipped his bare feet into black leather sandals and went through the bedroom into the long big-windowed sitting-room with the satisfaction of having sweated his boredom, at any rate for the time being, out of his body.

May, an elderly Scotswoman with iron grey hair and a handsome closed face, came in with the tray and put it on the table in the bay window together with The Times, the only paper Bond ever read.

Breakfast was Bond’s favourite meal of the day. When he was stationed in London it was always the same. It consisted of very strong coffee, from De Bry in New Oxford Street, brewed in an American Chemex, of which he drank two large cups, black and without sugar. The single egg, in the dark blue egg cup with a gold ring round the top, was boiled for three and a third minutes.

It was a very fresh, speckled brown egg from French Marans hens owned by some friend of May in the country. (Bond disliked white eggs and, faddish as he was in many small things, it amused him to maintain that there was such a thing as the perfect boiled egg.) Then there were two thick slices of whole-wheat toast, a large pat of deep yellow Jersey butter and three squat glass jars containing Tiptree ‘Little Scarlet’ strawberry jam; Cooper’s Vintage Oxford marmalade and Norwegian Heather Honey from Fortnum’s. The coffee pot and the silver on the tray were Queen Anne, and the china was Minton, of the same dark blue and gold and white as the egg-cup.

Q Branch had put together this smart-looking little bag, ripping out the careful handiwork of Swaine and Adeney to pack fifty rounds of .25 ammunition, in two flat rows, between the leather and the lining of the spine. In each of the innocent sides there was a flat throwing knife, built by Wilkinsons, the sword-makers, and the tops of their handles were concealed cleverly by the stitching at the corners. Despite Bond’s efforts to laugh them out of it, Q’s craftsmen had insisted on building a hidden compartment into the handle of the case, which, by pressure at a certain point, would deliver a cyanide death-pill into the palm of his hand. (Directly he had taken delivery of the case, Bond had washed this pill down the lavatory.) More important was the thick tube of Palmolive shaving cream in the otherwise guileless spongebag. The whole top of this unscrewed to reveal the silencer for the Beretta, packed in cotton wool. In case hard cash was needed, the lid of the attaché case contained fifty golden sovereigns. These could be poured out by slipping sideways one ridge of welting.

The complicated bag of tricks amused Bond, but he also had to admit that, despite its eight-pound weight, the bag was a convenient way of carrying the tools of his trade, which otherwise would have to be concealed about his body.

He heaved a deep sigh and reached into his hip-pocket for his gunmetal cigarette case. He was pleased to see his hands were dead steady as he took out his lighter and lit one of the Morland cigarettes with the three gold rings.

He ordered a tumbler of ouzo and drank it down and chased it with a mouthful of ice water. There was a strong bite under the sickly anisette taste and Bond felt the drink light a quick, small fire down his throat and in his stomach. He put down his glass and ordered another.

An excellent dinner, with two dry Martinis and a half-bottle of Calvet claret put Bond’s reservations about flying on Friday the thirteenth, and his worries about his assignment, out of his mind and substituted a mood of pleased anticipation.

Kerim ate a kind of Steak Tartare—a large flat hamburger of finely minced raw meat laced with peppers and chives and bound together with yolk of egg. He made Bond try a forkful. It was delicious. Bond said so.

He was sitting, naked except for his shorts, at one of the windows of his room, sipping a vodka and tonic and looking out into the heart of the great tragic sunset over the Golden Horn.

Pyjama coat instead of pyjama

He got up from the bed and went to put on one of the dark blue silk pyjama coats he wore instead of pyjamas.

A snack after love

Slivovic and smoked ham and peaches (…)

Breakfast on the run

They had breakfast of fried eggs and hard brown bread and coffee that was mostly chicory.

Bond mistrusted anyone who tied his tie with a Windsor knot. It showed too much vanity. It was often the mark of a cad.

In the restaurant car, Bond ordered Americanos and a bottle of Chianti Broglio. The wonderful European hors d’œuvres came.

Some tagliatelli verdi came, and the wine, and then a delicious escalope.

‘You will beat me if I eat too much?’

‘Certainly I will beat you.’

Naked without a gun

Bond hated someone else touching his gun. He felt naked without it.

James Bond’s personal tastes and preferences in Dr. No (the novel)