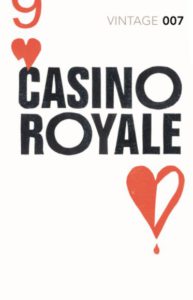 A novel’s protagonist only becomes a true unique character (‘character’ meaning something like ‘the mental and moral qualities distinctive to an individual’) when he has (like we all do) small, peculiar personal details or quirks.

What follows is a list of excerpts featuring James Bond’s personal tastes and preferences as written down in Casino Royale (1953), Ian Fleming’s first ever James Bond-novel.

(…) Bond undressed and took a cold shower.. Then he lit the seventieth cigarette of the day and sat down at the writing table with the thick wad of his stake money and winnings beside him and entered some figures in a small note-book.

On breakfast (and smoking)…

Bond liked to make a good breakfast. After a cold shower, he sat at the writing-table in front of the window. He looked out at the beautiful day and consumed half a pint of iced orange juice, three scrambled eggs and bacon and a double portion of coffee without sugar. He lit his first cigarette, a Balkan and Turkish mixture made for him by Morlands of Grosvenor Street, and watched the small waves lick the long seashore and the fishing fleet from Dieppe string out towards the June heat-haze followed by a paper-chase of herring-gulls.

On Bond’s car and how he drives it…

Bond’s car was his only personal hobby. One of the last of the 4 1/2-litre Bentleys with the supercharger by Amherst Villiers, He had bought it almost new in 1933 and had kept it in careful storage through the war. It was still serviced every year and, in London, a former Bentley mechanic, who worked in a garage near Bond’s Chelsea flat, tended it with jealous care. Bond drove it hard and well and with an almost sensual pleasure. It was a battleship-grey convertible coupé, which really did convert, and it was capable of touring at ninety with thirty miles an hour in reserve.

On Bond’s drinking habits and the ‘Vesper’…

‘Just a moment. Three measures of Gordon’s, one of vodka, half a measure of Kina Lillet. Shake it very well until it’s ice-cold, then add a large thin slice of lemon-peel. Got it?’ (…) Bond laughed. ‘When I’m . . . er . . . concentrating,’ he explained, ‘I never have more than one drink before dinner. But I do like that one to be large and very strong and very cold and very well made. I hate small portions of anything, particularly when they taste bad. This drink’s my own invention. I’m going to patent it when I can think of a good name.’

As he tied his thin, double-ended, black satin tie, he paused for a moment and examined himself levelly in the mirror. His grey-blue eyes looked calmly back with a hint of ironical inquiry and the short lock of black hair which would never stayin place slowly subsided to form a thick comma above his right eyebrow. With the thin vertical scar down his right cheek the general effect was faintly piratical. Not much of Hoagy Carmichael there, thought Bond, as he filled a flat, light gunmetal box with fifty of the Morland cigarettes with the triple god band.

On Bond’s dinner, his choice of champagne and his ‘pernickety and old-maidish’ attention to details…

‘Now,’ he turned back to the menu, ‘I myself will accompany mademoiselle with the caviar, but then I would like a very small “tournedos”, underdone, with “sauce Béarnaise” and a “coeur dártichaut”. While mademoiselle is enjoying the strawberries, I will have half an avocado pear with a little French dressing. Do you approve?’

With his finger on the page, Bond turned to the sommelier: ‘The Taittinger 45?’

‘A fine wine, monsieur,’ said the sommelier. ‘But if monsieur will permit,’ he pointed with his pencil, ‘the Blanc de Blanc Brut 1943 of the same marque is without equal.’
Bond smiled. ‘So be it,’ he said.

‘You must forgive me,’ he said. ‘I take a ridiculous pleasure in what I eat and drink. It comes partly from being a bachelor, but mostly from a habit of taking a lot of trouble over details. It’s very pernickety and old-maidish really, but then when I’m working I generally have to eat my meals alone and it makes them more interesting when one takes trouble.’

(…) he went over to his suitcase and took out white linen bathing-drawers and a dark blue pyjama-suit.

Bond had always disliked pyjamas and had slept naked until in Hong Kong at the end of the war he came across the perfect compromise. This was a pyjama-coat which came almost down to the knees. It had no buttons, but there was a loose belt round the waist. The sleeves were wide and short, ending just above the elbow. The result was col and comfortable and now when he slipped the coat on over his trunks, all his bruises and scars were hidden except the thin white bracelets on wrists and ankles and the mark of SMERSH on his right hand.

He slipped his feet into a pair of dark-blue leather sandals and went downstairs (…).