Synopsis | Bertrand Russell: Why I am not a Christian 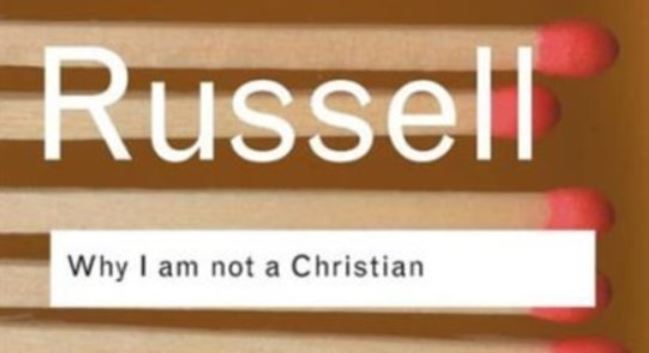 Bertrand Russell – Why I am not a Christian: And other essays on religion and related subjects. London: Routledge (1957, 2009)

Why I am not a Christian – the essay

Why I am not a Christian, is an essay written by Bertrand Russell, based on a talk given in 1927. As the subtitle of this publication states, it’s a collection of essays. Only this first essay really analyzes the philosophical points of discussion, and dispels them all.

Russell starts by giving a definition of what it means to be a Christian. According to him, being a Christian means at least two things, (1) “you must believe in God and immortality”, and (2) “you must have at the very lowest the belief that Christ was, if not divine, at least the best and wisest of men.” (p. 2) Russell continues by giving the reasons (arguments) why he does not believe in God or immortality, and why he does not think Jesus was “the best and wisest.” Of course only the first explanation carries any weight in a theological debate, because even if Jesus was the ‘best and wisest’, that wouldn’t proof anything concerning the existence of (a) god.

The argument from First cause

The Natural Law argument is next. Russell refutes this argument by pointing out that there is a logical follow-up question, which dissolves the whole explanandum. As the Natural Law argument attempts to prove the necessity of a god by the necessity of natural laws, it leaves aside the issue of the law-abidingness of the law-giving god. Either god had good reasons for exclaiming the laws we see around us all day, or he did not. If he did have good reasons, if he was obliged, he was subject to law himself, which would make the ‘thing’ obliging him the explanation of the laws. Or, if he wasn’t obliged, the supposition that everything is subject to (a) law is obliterated, which would make it possible to say that the laws of nature we observe just are, and aren’t there for any special reason at all. Besides that, Russell also point out that the supposition that laws require a lawgiver is a confusion of natural with human laws. The argument looks similar to the Argument from Design, and it is, except for the fact that the explanandum in the Natural Law argument (where do laws come from?) is different from the explanandum of the First Cause argument (where does complexity come from?).

The Argument from design

The Argument from Design has, of course, lost all it’s power after Darwin published The origin of species. Besides that, anyone who takes a closer look at nature would have to be repelled by the idea that all that was the best ‘omnipotence and omniscience has been able to produce in millions of year.’ (p. 7)

The Moral Argument for deity

The Argument for the remedying of injustice

Another argument is the Argument for the remedying of injustice, (i.e. god’s existence is required to bring justice). God is supposed to keep us in line by offering us an earthly choice between an afterlife in either ‘heaven’ or ‘hell’. Russell undermines this line of thought by pointing out that, scientifically speaking, it would be weird to suppose that there exists a place where everything is good, to counterbalance the earthly injustices. Because the spreading of justice and injustice would then be too imbalanced as to be unbelievable. He illustrates this argument with a nice example:

“Supposing you got a crate of oranges that you opened, and you found all the top layer of oranges bad, you would not argue: ‘The underneath ones must be good, so as to redress the balance.'” (p. 10)

The character of Christ

In the next part of the essay, Russell adresses The Character of Christ. At first he points out that there are a lot of differences between ancient and modern-day christians, if you look at the ‘standards’ Jesus set: “I have no doubt that the present prime minister, for instance, is a most sincere Christian, but I should not advise any of you to go and smite him on the cheek.” Christ is also presumed to have said something like “Judge not lest ye be judged,” which is slightly opposed to earlier and present courts of justice. On the moral character of the teachings and actions of Christ and all christians after him, Russell concisely states:

Has religion made any useful contributions to civilisation?

In the next essay, appropriately titled Has religion made any useful contributions to civilisation?, Russell conducts a further investigation of the question that the last sentence implicates. As you should expect, the answer is negative. Advancing on the discrepancy between teachings and actions, Russell writes:

In these and the following essays, Russell uses clear logic and scientific understanding to evaluate a whole lot of different questions (Do we survive death? What’s the difference between Catholic and Protestant scepticism? What happened to Thomas Pain? How nice are Christians? Can religion cure our troubles?) which are sometimes barely related to the question of the existence of god(-s), which I presumed to be the central philosophical investigation of the book. The title of the book is misleading in that respect. The only other chapter devoted to that question is the transcription of a discussion between Russell and Father F.C. Copleston.

During the discussion between Russell and Copleston, Russell propounds a few important (logical) distinctions, which can come in very handy during debates with believers. The Father uses a Leibnizian line of thought to proof the existence of god. This train of thought relies heavily on a certain meaning of the concepts ‘necessity’ and ‘contingency’ which Russell dislikes. Copleston uses a variation of the First Cause argument discussed above. He states that there is nothing in our earthly world which depends on itself for existing (my existence depends on that of my father and mother, and so on…). So we need a being which “contains within itself the reason for its own existence, that is to say, which cannot not-exist.” (i.e. all earthly beings’ existence is contingent, whereas gods existence is necessary.) (p. 127) Russell states that the word ‘neccesary’ can only be applied to analytic propositions: “The word ‘necessary’, it seems to me, is a useless word, except as applied to analytic propositions, not to things.” (p. 129)

Further on in the debate, Russell presses Copleston to the following statement:

To which Russell replies (in a genius way I must say):

This kind of thinking is being used in modern cosmology. As the backcover of Stenger (2000) states: “(…) reality (…) had no beginning, and was not created. It was nor will be. It just is.”

All in all, it has to be said that Russells writings as collected in this book, are very, very excellent, as is almost always the case. If there was a Gold Medal to be handed out for clear and logical thinking, written down with passion, Russell should have gotten it.

A short note on the quality of Routledge books

The edition of Why I am not a Christian currently standing on my shelf, was part of the Routledge Classics series, printed by Routledge (Taylor and Francis Group). It’s sad to say, but their methods of binding leave much to be wished for. I needed to re-glue a couple of pages because they let loose. Unfortunately (for Routledge) I know someone else who has got a book from the same serie, who encountered exactly the same problem. So I couldn’t advise one to buy this specific edition of the aforementioned book. On the other hand, my edition of D.C. Dennett’s (1999) Content and Consciousness, belonging to Routledge’s International Library of Philosophy series was fine, which means that they know how to make good books. My advise to them would be to continue the old path!